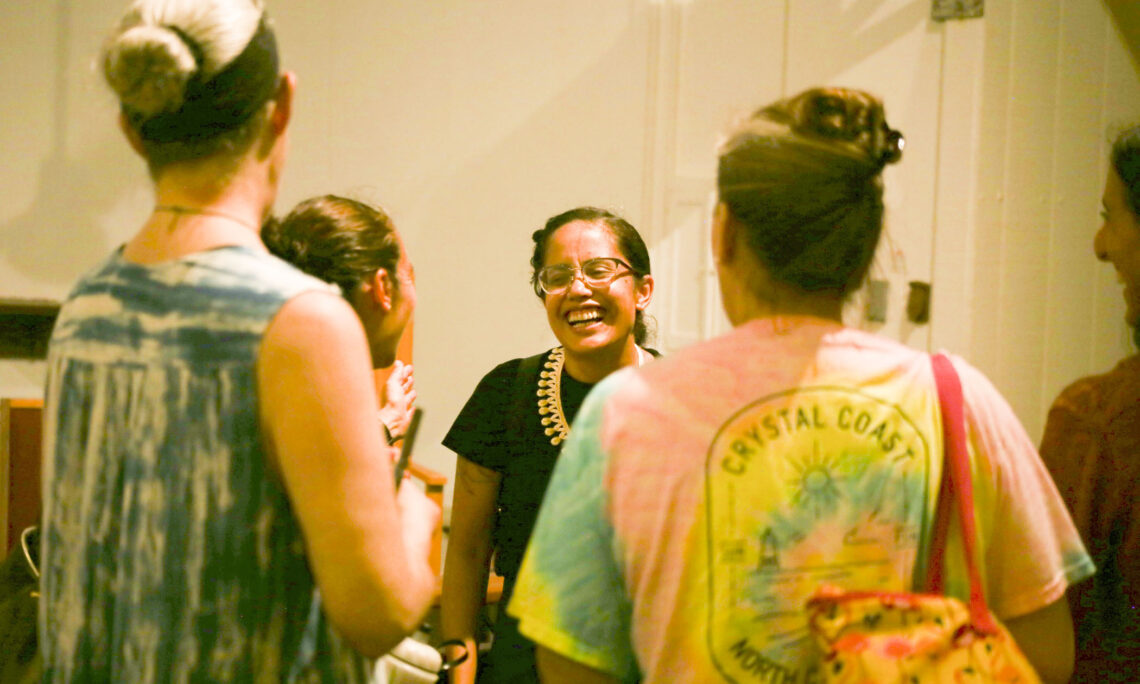 Jetñil-Kijiner is known throughout the world for her powerful spoken word poetry. Her work intermingles the urgent call for global action to halt climate change with ruminations on the challenges posed to Marshallese citizens and culture by discrimination and the U.S. nuclear testing legacy.

In 2014, Jetñil-Kijiner delivered “Dear Matafele Peinem,” a poem to her daughter, at the 2014 United Nations Climate Summit. In recent years, she has partnered with video artists and fellow writers to produce numerous creative pieces to accompany her work, traveling to remote locations such as Greenland and the Runit Dome, located on Enewetak Atoll.

In her presentations on Kwajalein, Jetñil-Kijiner shared the poem “Rise,” a video filmed with Greenland’s Aka Niviâna for 350.org. The piece interlinks the lives of women facing climate change with references to customs and legends. The poets are portrayed as sisters from distant islands exchanging symbolic gifts from their homes–the rocks of Greenland for shells carried from Bikini Atoll and Runit Dome.

“We have a custom in the Marshall Islands where, if you visit someone’s island, you don’t show up empty-handed,” Jetñil-Kijiner said in her address to Kwajalein High School Students, about “Rise.” “So, in the video, we are actually demonstrating that.”

A prophetic Marshallese legend of two sisters from the island of Ujae connects climate change with the desire to retain one’s own home in the poem. After learning that her sister has magically turned to stone, her sibling chooses “to be rooted by her sister’s side,” and shares her fate by choice on the edge of the reef.

“Rise” and an earlier piece, “Tell Them,” convey the shared experiences of those whose lives are impacted by climate change and the rising seas. In “Tell Them,” Jetñil-Kijiner poses a passionate declaration: “We are nothing without our islands.”

Now a climate envoy for the RMI, Jetñil-Kijiner’s work on the RMI National Adaptation Plan is making the voices of those communities heard. She elevates the concerns and inputs of traditional leaders and Marshallese citizens into discussion informing the renewal of the Compact of Free Association between the RMI and U.S.

“There is a huge undertaking where we will be doing something called community consultations,” said Jetñil-Kijiner in an interview with The Kwajalein Hourglass. “It’s the biggest climate outreach that the national government has done so far. We’re going to get feedback from vulnerable community members—women, fishermen, weavers; sector-level agencies and college students; and we’re getting perspectives on what they’ve seen, what their thoughts are on climate change, and what adaptation pathways they’d like to see in the future. That’s going to feed into our development strategizing.”

At a Kwajalein High School assembly, Jetñil-Kijiner shared how writing has shaped her life. As a young person, she was compelled by her parents to contribute back to her community and her people. Writing became the key to help her accomplish that goal. It would ultimately fuel her graduate-level work in Hawaii, help her reach global audiences, and later, co-found the Majuro-based non-profit organization, Jo-Jikum. The initiative connects Marshallese youth with opportunities to engage in community-focused climate change activities and education.

“It’s small, but it’s feisty,” Jetñil-Kijiner said of Jo-Jikum. “It’s difficult, as a nonprofit, to stay afloat. … We’re trying to keep turning out projects that help support our youth being involved in these issues.”

The poet credits her mother, former RMI President Hilda Heine, as her major source of inspiration. At KHS, she recalled how Heine had translated her doctoral work from her first language, Marshallese, into English. She shared her pride in her mother’s strength as an educator and leader, and fondly shared Heine’s baffled reaction after accompanying her daughter to a slam poetry reading.

“Kwajalein will be just as impacted as the outer islands,” Jetñil-Kijiner said. “I think it can only be a good thing. The U.S. Army is a huge contributor to climate change.”

In the days that followed her community readings and student workshops, members of the atoll community expressed their gratitude for the poet’s visit. Her time on the atoll was made possible with support from Kwajalein resident Pamela Sakaio, Sonia Tagoilelagi of the International Organization for Migration and RMI Minister of Education, Sports and Training Kitlang Kabua. Additional support was provided by a Kwajalein School System planning committee and special assistance from teachers, including Christi Cardillo, Greg Vessar and Sarah Scott.

“You made an impact on these students,” Sakaio wrote to Jetñil-Kijiner, of her time on Ebeye. “They were so excited and inspired to see one of their own up there on stage!”

Jetñil-Kijiner had much to say about her visit to Ebeye and the chance to work with the island’s students.

“It was my first visit to Ebeye,” Jetñil-Kijiner said. “I wish I could have stayed longer, to be honest. It was nice to do the tour and see the island for myself. It was cool to meet some of the students and perform for them. This kind of poetry—not all of them will like, but some of them seemed to. That was good. I just wanted to see it. I wanted to be there, physically. I’ve read and heard about Ebeye so much, and how loving the community can be, and how connected they are. I was really looking forward to just being around. I’m hoping to go back again at some point.”

Jetñil-Kijiner hopes the Marshallese youth she met during her visit will be encouraged to try something new to help them give back to their communities someday, she said.

“If you are doing something that people think is ‘weird’ because it’s different, and no one’s done it yet, don’t give up,” she said. “You can still do it. I’m hoping that helps [and] comes through a bit—that you can study something you care about that’s fun and can also find a way to give back to and help our community. … I’m hoping to be accessible to them. I’m just another member of our community. … I just want to be a resource for them.”