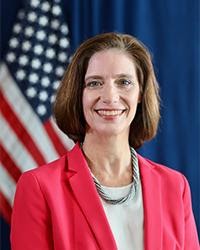 Roxanne Cabral was confirmed by the Senate as U.S. Ambassador to the Republic of the Marshall Islands on December 19, 2019.  Prior to this, she served as Chargé d’Affaires a.i. at U.S. Embassy Panama since March 2018.  She arrived in Panama as Deputy Chief of Mission in August 2017.  She has over twenty years of experience as a U.S. Diplomat with several high impact assignments in Washington and abroad.  Her most recent Washington, DC assignment was as the Director of the Office of Policy, Planning and Resources for the Under Secretary of State for Public Diplomacy and Public Affairs from 2015-2017, where she led the development of public diplomacy policy and management of global PD resources to advance key national security objectives.  She held the 2013-14 Department of State Senior Fellowship at the Washington, D.C.-based think-tank The Atlantic Council, during which she co-authored a white paper entitled “Diplomacy for a Diffuse World.”  She was the Public Affairs Section Chief at the U.S. Consulate General in Guangzhou, China from 2010-2013.  Previous overseas assignments include Taiwan, Albania, Mexico City, and Ukraine.  She also served as the public diplomacy advisor in the Department of State’s Bureau of European and Eurasian Affairs focusing on Balkans issues from 2006-2008.