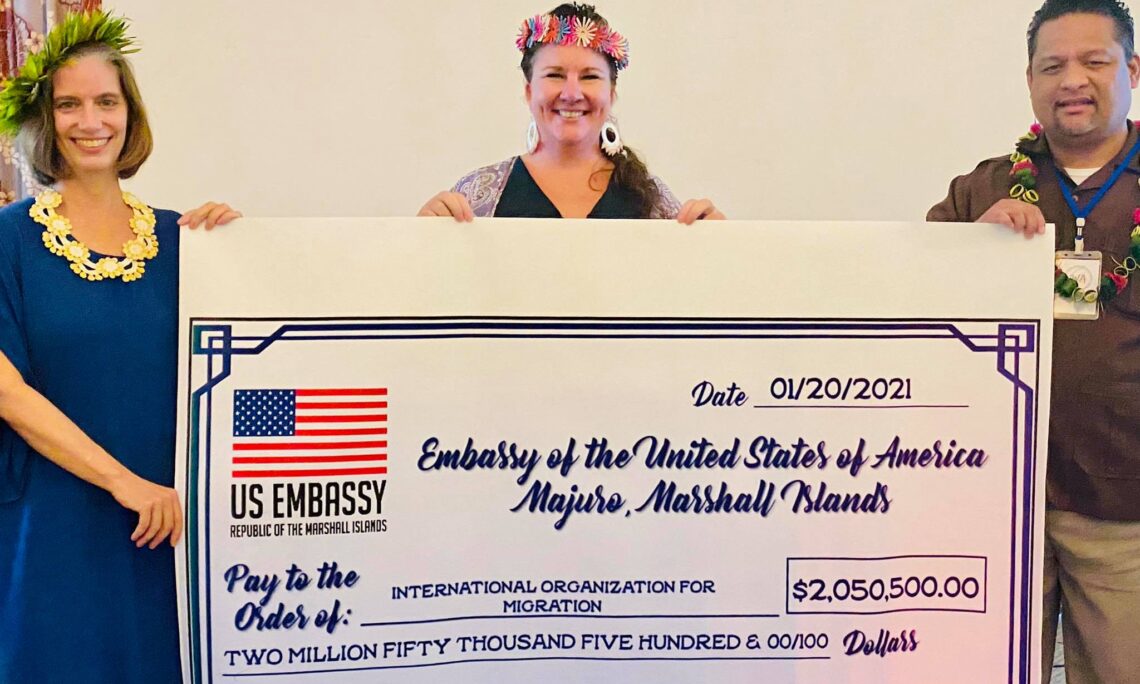 The United States Provides over $2 million in support Women’s Empowerment across the Freely Associated States.

Majuro, Marshall Islands – The United States awarded a grant of $2,050,500 to the International Organization for Migration (IOM) – Micronesia for implementing projects designed to address women’s and girl’s issues including: gender discrimination, entrepreneurship, community development among others throughout Republic of the Marshall Islands, Federated States of Micronesia, and Palau.  The event was attended by over 30 institutions, members of the diplomatic corps, and the Marshallese government.

At the launch of the initiative, held on January 20, 2021, IOM shared that it will work closely with the three national governments, local NGOs and the private sector, during the next 12-month to provide tangible solutions addressing women’s empowerment. During the event the organization underscored the importance of dealing with gender issues as a key component of creating fundamental sustainable development in the region and throughout the world.

“The U.S. Embassy is really excited to sponsor this two million dollar grant to support regional efforts in Palau, FSM, and here in the RMI, to remove barriers to gender equality, provide new tools for NGOs and entrepreneurs, and promote networking across diverse groups,” remarked Ambassador Cabral.  “We greatly appreciate IOM for taking on this important initiative and to the RMI government for its full support.”

Foreign Minister Nemra remarked, “We are pleased to join 31 UN Member States in the U.S.- led Call to Actions on Women’s Economic Empowerment.”  He went on to state, “ In Closing, I commend and express our appreciation to the U.S. Government and Embassy, IOM, and partners for this timely initiative, so today, I call on all of us to “inspire” action that will bring results for the Marshallese women and girls.

IOM is an inter-governmental organization known for its work in the field of migration. The Organization has a global presence with over 450 offices worldwide, including four offices in the north Pacific region. The Head Office overseeing IOM’s operations across the expansive north pacific region is located in Pohnpei, the Federated States of Micronesia (FSM). IOM also has sub-offices in the FSM States of Chuuk, Kosrea and Yap, as well as, a sub-offices in Majuro and Ebeye, in the Republic of the Marshall Islands, and Koror, Palau.